It’s December 1974 and you are reading “Super Stock and Drag Illustrated”. Enjoy.

The Gapp and Roush “Juana Taxi” 4-door wonder has already set the Pro Stock record down to 8.84, and there’s more left. 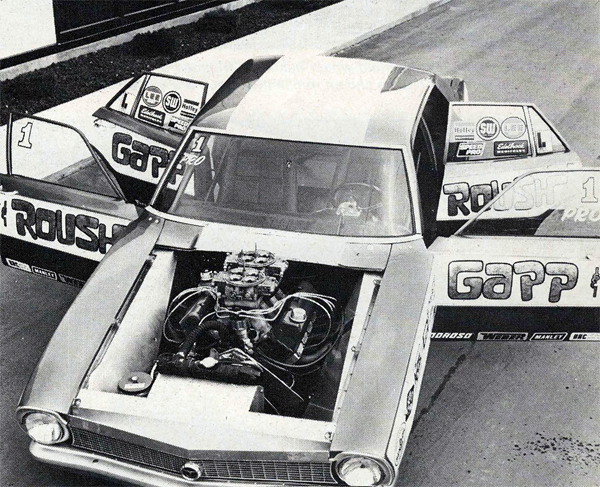 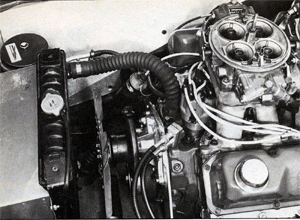 For instance, the original 73-weight break was 6.50 lbs./cubic inch for small cars and 6.70 lbs./cubic inch for Hem’s. Then Nicholson won Pomona with Gapp as runner-up. Chrysler won Columbus, Jenkins won Englishtown and then Glidden won Indy with Gapp as a runner-up. Then Gapp won the World’s Finals in Amarillo. Since the Fords started to own the class, the weight break was changed to 6.65 for small cars and 7.00 for the Hemi. Ontario was “too much” (with Gapp winning again) and so the Vega remained at 6.65 while Fords went up to 6.75. After Gainesville, some new numbers came into existence. The Vega rose to 6.70, the Ford to 6.80 and the Chryslers came down to 6.90.

Many complained that the short wheelbase combinations were the fastest and that the long wheel base cars (which had a 6.45 weight break) couldn’t win. The class break was set at 105 inches, just to make sure that the two-door Maverick with a 104-inch wheelbase and the powerful 351 engines would not be able to take advantage of the 6.45 break.

Right about that time, Wayne Gapp and Jack Roush saw a golden opportunity. A 6.45 class break rather than 6.80 would allow them to save a good 130 pounds. They were willing to try anything, and they did. The result is the world’s only four door Pro Stocker. 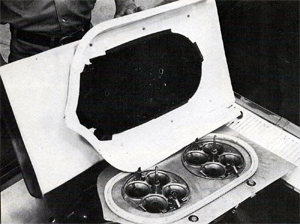 Ford’s racing banner now hangs on a four-door Maverick, which has so far cleaned house in everything but the last round at Englishtown. Even there, they had the better E.T. of 9.02 against 9.11 for Larry Lombardo driving “Grumpy’s” machine. It wasn’t that Gapp went to sleep. He started to feel the car creeping against the staging light, and had to depress the clutch slightly just before the light was changing to green. Wayne more than made up for it by winning, in quick succession, the Muncie meet, the Super Stock Nationals, a points meet in Minnesota and the Grandnational at Sanair in Montreal, Canada, where he dropped the Pro Stock record to 8.84. Then he topped it by winning the PHR meet at Martin, Michigan. Like Wayne Gapp says, “I’m all in favor of factoring.” From the looks of it, the ” four-door rules” are guaranteed to the end of the year.

There is lots of theory, for and against long wheel-based cars. In selection this machine, Wayne could have gone to an old style Mustang (like Nicholson’s new car) or to the four-door Maverick. He picked the four-door Maverick. The picked the four-door for “aerodynamic reasons,” even though the Maverick has some slight drawbacks when compared to the Mustang II or the Pinto. Since Pro Stock calls for the engine to have the no. 1 spark plug in line with front wheel spindles, it’s hard to get enough weight on the slicks as the rear wheels move further back. In other words, the weight distribution is worse on a long wheel base car. Also, the long wheelbase works against weight transfer. Now, with two strikes against it, you have to build a light car, which can then accept enough ballast in the rear, in form of batteries, brackets and such.

This is where a little finesse with horsepower per cubic inch comes in. for instance; the Chevy’s have been most efficient at 320 to 330 cubic inches. This makes it very difficult to build a long wheelbase Camaro so that it is light enough to allow ballasting in the back. The 351 Cleveland canted valve head is capable of feeding a larger engine, and so the four-door Maverick has been fitted with a 366 cubic inch Cleveland. This allows enough weight for the total car and enough weight on the back wheels for traction. 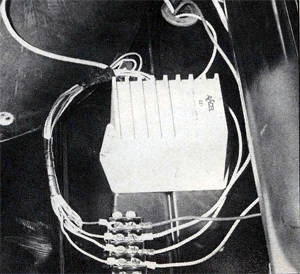 The other drawback of long wheel based cars in inherent in the condition of the track at the starting line. Most long wheelbase cars are in the 110 to 120 inch range, and this is where the tires churn up the blacktop. The short wheel base Pintos plant the tires a good 15 inches closer to the starting line and so you get a definite edge with small car. Gapp feels that those inches make quite a difference in the terms of traction. To remain competitive, the long wheel base suspension must be tricked up.

On the plus side, the long wheel base car is tremendously more stable than a Pinto. As Jack Roush points out, it’s the relationship between the wheelbase and rear tread width that controls the reaction and determines how straight the car will go. The safety translates itself into a faster car as well. When the 94-inch wheelbase Pinto gets crossed up you have to lift. On the other hand, when the 109-inch Maverick is crossed up, Wayne’s foot stays on the gas and he just drives his way out.

Originally, when Don Hardy of Floydada, Texas built this machine it was intended as a two-door. Then, Wayne proceeded to pick up a four-door body, brought the car back to his shop and mated body and chassis. The front end remained as Don Hardy had arranged it, but the traction bars and suspension parts moved back in relation to the front end. The body was acid-dipped and adapted to the new floor panel. Acid dipping leaves the sheet metal so thin that pushing on the door or the body panel can leave a dimple. Gapp and Roush solved this by spraying 8 to 10 pounds of foam on the inside of the body to make it more rigid. Jack Roush tells us that Insta-Foam Products in Joliet, Illinois, make a polymetric isocyanate material which mixes with a catalyst as it is sprayed and soon becomes rigid. You can use anywhere from 1/2-2 inches of this very light trapped air cell foam and get much longer life out of the body. 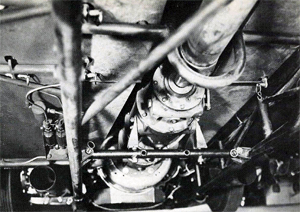 Wayne Gapp fabricated some fancy strut type door hinges patterned after Don Hardy’s and did a number of other weight cutting tricks on the Maverick. Some racers stick with the original hanging pedals for the brake and clutch. On a Gapp and Roush machine, you’ll find the pedal assembly anchored on the floor and tied to the chassis so that it’s not dependent for positioning on a flexy fire wall.

A look under the four-door Maverick reveals a fabulous tubular sub-frame with numerous struts that combine stiffness and lightness. Since this is a machine that must be serviced between rounds, cross members are retained with quick disconnect pins for fast access to the Lenco.

At the back, you’ll find a hand-made five-gallon aluminum gas tank. It is small enough so that you can keep a consistent amount of fuel without slosh and, of course it’s also safer since cutting down on the fuel lessens the fire hazard. As on all the latest Don Hardy Ford machinery, the rack and pinion has been moved forward so as not to interfere with the engine. This tricky, since moving it too far out of position can alter the toe-in pattern and the car spooky. 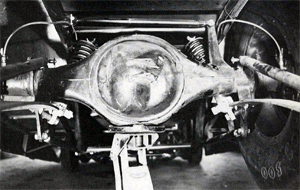 At the rear, the suspension is fairly conventional, with a pair of ladder-type traction bars. A number of optional pivots are provided, but whenever we have seen it, the bars have simply been set in the bottom hole. The narrowed rear is fitted with Strange Engineering axle shaft and spool. Supplementing the two traction bars is track bar as well as a pair of Monroe double-adjustable coil /over shock suspension units.

Most people attach their air scoop to the hood and then rely on a seal between the hood and the plate at the carburetors. Gapp and Roush take no chances on anything like that. They found that the hood is subject to some substantial negative pressures. When the hood then lifts off the carburetor the scoop looses its ram action. Here, the ram scoop is bolted directly to the carburetors, seals against a plate and is independent of the hood itself. Also, the hood scoop is tall and placed well above the hood line. This gets it away from the disturbing action of boundary layers and raises it above the turbulence generated by the nose of the car.

The top of the 6464 Holley’s is milled off to provide more clearance within the hood scoop limits and to improve the airflow into the carburetor. The intake manifold is not only lightened, but also opened up for improved cooling by getting rid of all baffles between the runners. Also, the plenum chamber on top of the Edelbrock intake manifold is turned around end for end to make room for the Accel BEI distributor.

Jack Roush builds all his engines around lightweight aluminum rods and pistons both by BRC. The pistons are designed for max compression and for valve clearance to Roush’s specifications. They also have a broad fire slot which provides adequate clearance at the spark plug without having to trick yourself out of races. Moving the rack and pinion steering clears the area under the engine and allows the sump to move from front to rear. Since ground clearance is at a premium, Jack Roush built an oil pan complete with side wings that add capacity without increasing depth. Now that oil is spread over a sizeable area, the problem becomes one of controlling it without allowing it to slosh or uncover the pickup. This, in turn, leads to an elaborate set of three trap doors and combination of baffles. 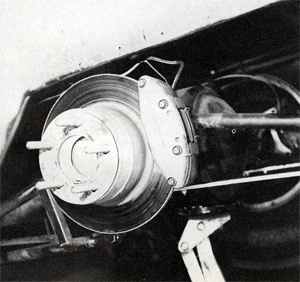 No story one a Gapp and Roush machine would be complete without due credit to Bill Jameson, Al Buckmaster and Lou Wolsinski, who can fabricate and design most anything that goes on a race machine. Al Buckmaster has done extensive flow work on the Cleveland heads together with Jack Roush, which explains some of the extra horsepower the machine, has been developing.

You have all probably heard of a split and reunion in the Gapp and Roush camp. The result has been an extensive reorganization in which Roush has taken over strictly the engine development, while Gapp is in charge of the race machinery and will also be building cars. Jack plans to expand his engine activities into other realms such as Modified Production and Super Stock, so watch for a raft of new developments from their Livonia, Michigan shop.