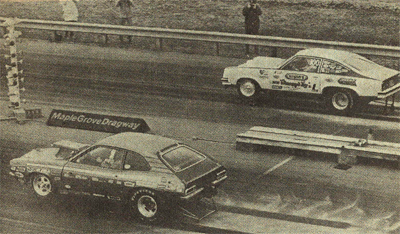 The somewhat sparse grandstands became jam packed as many of the fans gave up the heated comfort of their cars for a look at Jenkins’ all-new 1974 Vega and the World Finals winning Pinto of Gapp. Following the usual burn-out rituals. Jenkins and Gapp staged up for their first round encounter. Jenkins seemed to grab a slight early advantage, but Gapp overpowered the Vega nearing the finish for a record 8.78, 152.58 to 8.88, 152.54 round win. In the second and final round, Gapp parlayed a hole shot into victory despite losing an engine near the finish line. Gapp’s 8.88, 147.54 held off Jenkins’ fast-closing 8.87, 152.54. It should be noted that both cars were about 200 pounds lighter than legal weight.