These are from National Dragster’s ‘Bits from the Pits’ in various issues leading up to the intro of the car.

One of the biggest mysteries in Pro Stock circles surrounds the 4-door Maverick rumored to be sprung on the competition by Ford exponents Wayne Gapp and Jack Roush. The troops are wondering where, when, and if “The Limousine” (as it’s humorously referred to in the trade) will hit the strip. At Columbus?

There’s a strong rumor floating about that Wayne Gapp and Jack Roush are preparing a Maverick 4-door for the Pro Stock wars. Seems that Gapp & Roush are intrigued with the 6.45 weight break for longer wheelbased cars, and feel that the Maverick in itself is aerodynamically superior to the smaller Pintos and Mustang II’s. This combination, which is said to be targeted for completion by the Springnationals, could prove to be most interesting!

The long awaited debut of the Gapp & Roush 4-door Maverick occurred this past weekend at Maryland International Raceway, when NHRA World Champion Wayne Gapp stole the show at the NHRA Pro Stock Circuit race at the Budds Creek facility. Gapp hit an off-the-trailer 8.92, 154-mph effort with the “taxi”, and proceeded to win the entire meet, whipping Richie Zul in the final, 9.03 to 9.07. 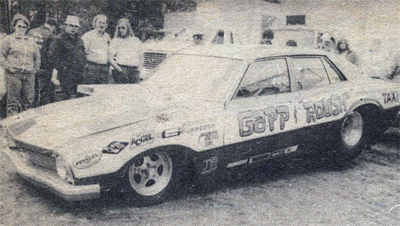